Posted by Gabriele Butkute on November 15, 2016

By Gabriele Butkute AMRSB, science policy officer at the Royal Society of Biology and the Biochemical Society

The Royal Society’s Annual Diversity Conference, ‘Diversity Matters – the road to inclusivity’ provided an uplifting environment to learn about initiatives in a range of workplaces. Meeting representatives from across the science sector, including from education and government, who are dedicated to improving diversity, was a hugely motivational and informative experience.

Andrew Parker, director general of MI5, gave an enlightening keynote explaining how diversity is essential to UK security as, ‘the richest mix of people equals the best talent.’ MI5 received the top position in Stonewall’s top 100 employers’ list earlier this year, for good practice in its support for LGBT employees.

We also heard from Network Rail, Stonewall, Employers Network for Equality and Inclusion, Equality Challenge Unit, National Diversity Awards and the University of York; all of whom shared their experiences and tips on how to create an inclusive and welcoming environment for staff and volunteers.
Barriers to diversity and tactics to overcome them

Professor Paul Walton from the University of York was the chair of the Department of Chemistry when it became the first university department to receive the Athena SWAN gold award, in recognition of commitments made to tackle gender inequality in higher education. He had six words to describe the road to an inclusive environment: openness, leadership, patience, benefits, evidence base and champions.

There was a great deal of discussion about senior management buy-in as key to implementing diversity strategies in the workplace. However, it was also suggested that a ‘top-down’ approach (where diversity policies filter down the organisational hierarchy) may ‘get-stuck’ at a manager level, potentially becoming difficult to measure when left to the discretion of an individual. A proposed solution to this was to enlist personnel, across departments and levels, who are responsible for the implementation of equality and diversity objectives and accountable for their fulfilment. Another suggestion was to include commitment to diversity as a criterion for promotion and/or job descriptions for management roles. In addition, calls were made for organisations to look into more creative ways to assess whether equality and diversity objectives are met, rather than just through the standard check-box-form format.

Alex Gwynne from Stonewall noted that ‘there is still a lot of apathy in the community’. This may suggest that misguided views and assumptions about the level and importance of diversity in the workplace, often based on a lack of information, may be one of its largest barriers. Culture change is said to take around 10 years to settle in and, as Paul Walton put it, ‘Battle is in the margins; it’s the day to day victories that will make a difference’.

We survive because we are diverse 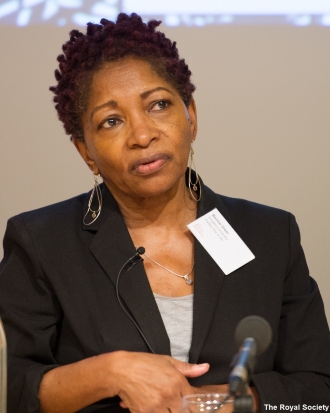 In Bonnie Greer’s aptly labelled ‘motivational address’, a particular comment really struck me: “By saying ‘diversity’ we have legitimised its opposite, which I don’t think exists; diversity is the same as democracy”.  Indeed, diversity is something that already exists all around us. As a ‘millennial’ myself, I was also glad to hear Bonnie speak about including young people in the decision-making process at all levels; “If an organisation is not ready to have a millennial at a board table then they aren’t ready for the 21st century”.  Bonnie finished her talk by suggesting that humanity has survived and prospered precisely because people travel, exchange ideas and learn from one other. In other words, we survive because of diversity.

Watch a video of the Royal Society ‘Diversity Matters – the road to inclusivity‘ event.
Find out more about the RSB’s diversity work.

Posted under Careers,Policy and tagged with diversity, equality, policy, science policy, women in science
Comments Off on Diversity in Science: creating an inclusive environment