People are strange. A striking example of that strangeness can be seen in the way we create and relate to monsters. Horror as a genre has long-standing appeal: from the monsters of mythology, through Stoker’s Dracula, to the modern horror movie, our enjoyment of the chilling endures. At the same time, we have a startling ability to ignore the chilling in the everyday world. 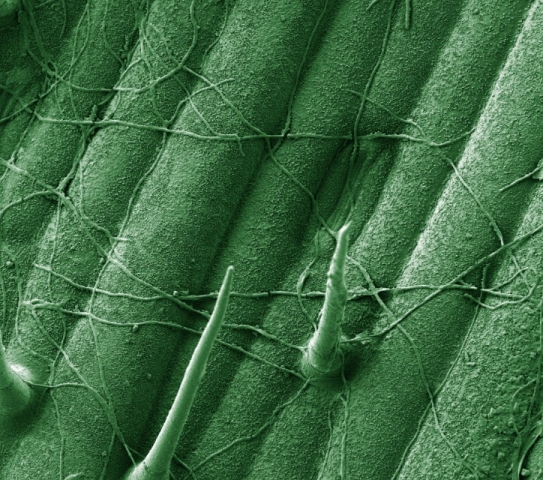 There are multifarious monsters all around. Consider emerging infectious diseases (EIDs)1, all but invisible except to specialists (and victims!), despite brief moments in the headlines: Bats dying!2 Fungus driving frogs extinct!3 Colony collapse threatens bees!4 Such threats to charismatic fauna concern us; we even treasure charismatic flora, as the response to ash dieback showed. But what if monsters threaten something more ordinary? Like… bread?

‘Mundane monsters’ might describe these threats, which undermine our food security, but rarely capture public imagination. After all, I wouldn’t call wheat charismatic: it looks like grass, and has the habit of falling over when taken from its cosy growth cabinet. A spineless sissy of a staple crop. But staple it is. And threatened, too. EIDs decimate yields – a recently discovered strain (Ug99) of wheat stem rust can cause 100% crop losses1. Discovered in Uganda in 19905, Ug99 reached Iran in 20076 and is a threat to wheat worldwide5. 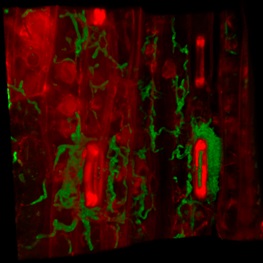 Zymoseptoria tritici grows (GFP-tagged fungus, green) between the cells and fills the substomatal spaces of a wheat leaf (red) with spore-producing structures, releasing thousands of spores for the rain to spread throughout the wheat crop. Confocal image by Dr H Fones, GFP-tagged Zt strain courtesy of Dr S Kilaru, University of Exeter.

Rust fungi are particularly monstrous, because they survive in intercontinental air currents. But other EIDs also travel: transport and trade make their spread unstoppable. At Exeter, Dan Bebber and Sarah Gurr have determined that with climate change, mundane monsters are marching polewards at 3 km a year7 and can be expected to saturate important agricultural countries by 2050, with fungi spreading fastest8. If that isn’t scary enough, then note this: like all good monsters, crop diseases are stealthy. Dan calculates that, with sufficient investment, an average of 200 additional crop pests and diseases per nation could be uncovered9. Even when we are aware of these threats, we don’t understand them well: the wheat pathogen Zymoseptoria tritici, which destroys up to 1.5 billion euros worth of wheat every year just in the UK, France and Germany10, is obscure in many ways11, although work at Exeter in the Gurr and Steinberg labs seeks to help elucidate its interactions with wheat12 and its basic cell biology13.

The mundane monsters are coming. They’re stealthy; they’re already here. And they are stealing your dinner. Maybe ‘mundane’ is misleading.

Find out more about UK Fungus Day and Biology Week 2015.