By Pete Cooper, postgraduate student at The University of Exeter.
Read blogs about the other mammals in the #UKMammalPoll and vote for your Favourite UK Mammal. 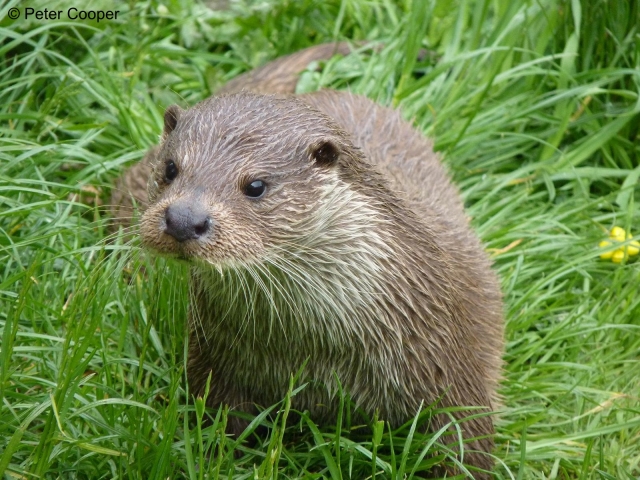 Why are otters so endearing? This may seem obvious, what with their ‘cute’ charismatic appeal, prevalence in our culture from Wind in the Willows to Tarka and resemblance to Benedict Cumberbatch. However one can’t describe the public’s love for them as one of familiarity – say, in the way we grow attached to songbirds by feeding them in the garden.

Otters move invisibly through waterways, a rippling shadow trickling through the dark river as we take to bed; unnoticed by those that have likenesses recreated in watercolours on their walls or soft toys in their beds – these people and many more are unlikely to have seen one in the wild. Perhaps that’s part of the appeal – otters are the great enigma in a landscape we think we know; the mystery of their secret lives is one thing that draws us to them.

Otter obsessives such as I typically have to make do with finding their spraint (dung) deposited on a bridge or rock. This is far more exciting than it sounds for both parties. Spraint is the otter’s form of Facebook, which is why they’re so easy to find in the first place – they want to be discovered. These piles of fish-bone filled faeces communicate status updates such as when lady otters are ready to mate (maybe it’s more like Tinder), ensuring that otter populations maintain a cohesive social network even given their solitary existence.

To the naturalist, it’s almost as good as seeing the animal itself. The most devoted otter-tracker is only likely to collect a handful of sightings in their lifetime (unless based on the West Scottish coast or Dorset’s River Stour, where otters have adapted to have a day-active lifestyle). The distinctive smell is surprisingly pleasant (no worse than some of the aftershaves on the market), a curious blend of cured fish and fruit tea. To the more scientifically inclined it provides gold-dust data on the diets of individual animals. Within droppings the bones of fish and amphibians can be easily identified with the aid of a hand-lens.

Above anything else, finding spraint was how naturalists were first alerted to the fact that the otter had returned to Britain – for not very long ago, we almost lost it for good. Once bountiful enough in number that otter hunts were a traditional rural pastime, over the second half of the last century those same otter hunters realised their quarry was dwindling fast. The reaction of those who cared, from the banning of pesticides like dieldren, that had triggered a steep population decline, to the reintroduction of otters to areas hardest hit, showcases one of the strongest conservation success stories in this country. Otters are now found right across Britain, and it’s highly likely your nearest stream is part of the territory of at least one adult dog otter. At a time when people are often turned off wildlife conservation by constant doom-saying and depressing statistics, tales of hope like this one are needed more than ever.

Each time I have seen a wild otter it has been something I can never forget, not only because it doesn’t happen often, but because they can’t be described as anything other than magic. When I watch that dark head getting smaller and smaller as it heads downstream, I want to jump in and follow it, to be a part of that world I can never see. The otter transcends the world we know and the one we don’t, and therein lies our deep fascination. A top predator of our rivers and wetlands, mysterious yet familiar and a true comeback-kid that shows that through working together, we can make a difference to the fortunes of the natural world; the otter is a great candidate to champion UK mammals!