Securing the future of Scottish Wildcats

By Vicky Burns, Scottish Wildcat Action
Read blogs about the other mammals in the #UKMammalPoll and vote for your Favourite UK Mammal. 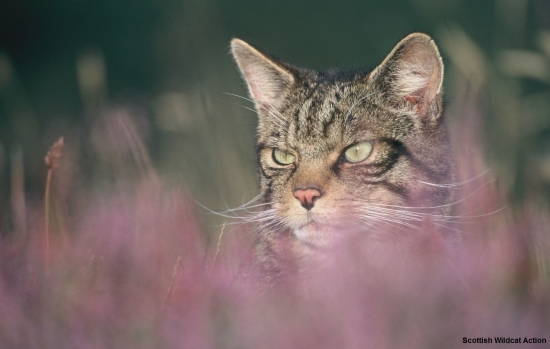 Scottish wildcats are now critically endangered. Once a common sight throughout Britain, hunting, habitat loss and, more recently, introgressive hybridisation means there are now less than 300 left in the wild. The biggest threat is mating with our domestic cats, particularly feral cats living in the wild.

Scottish Wildcat Action launched in 2015 and unites over 20 partner organisations in the biggest ever project to save the species.

Dr Roo Campbell (below) has spent most of the last five years studying wildcats in the Scottish Highlands. He is responsible for a team of wildcat officers who carry out conservation work on the ground across several priority areas in Scotland: Morvern, Strathpeffer, Strathbogie, Strathavon, Northern Strathspey and the Angus Glens. 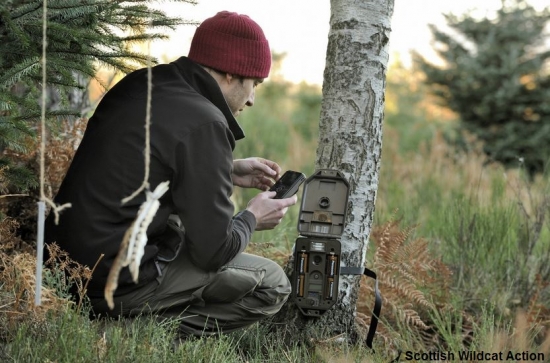 Dr Campbell’s team recently conducted the biggest ever wildcat survey thanks to funding from Heritage Lottery Fund. The results shone a light on the desperate state of the species whilst providing hope for the future by helping the team to target conservation work more effectively.

“The recent survey was illuminating,” said Campbell. “We covered a huge area: 620 square miles in five of the priority areas. The hard work from 139 volunteers to monitor the 347 trail cameras over the winter was gruelling at times, especially during flooding and heavy snow. From the 200,000 images collected, we analysed the coat markings or pelage of cats on camera. We identified 19 wildcats, 40 domestic cats (mostly feral cats) and 44 hybrids; cats which showed a few wildcat characteristics but have visible domestic cat heritage.”

Although they look like large tabby cats, Scottish wildcats are quite distinct. Along with other terrestrial British fauna, they were separated from their European counterparts 9,000 years ago. The domestic cat probably came over to these islands with the Romans around 2,000 years ago (possible earlier) but are most closely related to the Near Eastern wildcat. The most recent common ancestor of the Scottish wildcat and the domestic cat was possibly earlier than 173,000 years ago. 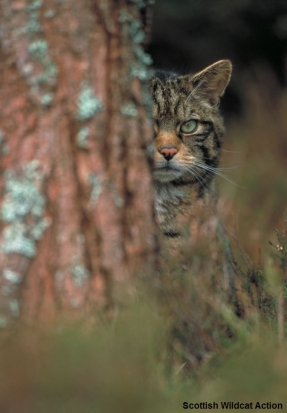 “They can, however, breed and produce fertile hybrid offspring”, said Dr Campbell. “Hybridisation is a big threat to the species and has likely been going on for a number of years. With every new generation, continued introgressive hybridisation (e.g. a hybrid cat backcrossing with a wildcat) weakens the wildcat gene pool. This is because wildcats are well adapted to life in the wild. They are larger and have a denser coat and a shorter more efficient gut. Domestic cats, on the other hand, have evolved to depend on humans.”

“There are thought to be 100,000 feral cats in Scotland alone but only 100 to 300 wildcats. If it wasn’t for the sheer numbers of feral cats filtering into our wilder areas from the human population centres, selection pressures may well have already curtailed the hybridisation process by weeding out the less well adapted hybrid and feral cats.”

The next step in wildcat priority areas is to neuter and vaccinate the feral cats found on Scottish Wildcat Action’s trail cameras. Treated feral cats no longer pose a risk to the wildcats that remain and they may help keep out other cats that are not neutered or vaccinated. Most of this work will take place between October and February over the next four years.

“Cats are more likely to take the bait, which is usually tinned tuna or cat food or game birds, when the harsher winter months are upon us. There is less food around during this time so the feral cats are more likely to go into the cage traps which make it easy for us to transport them to the vet. Cats are also roving around more looking for mates during the winter breeding season, which means they are more likely to discover our traps.”

The Royal Zoological Society of Scotland, another partner in the project, recently opened their first wildcat conservation breeding enclosure at the Highland Wildlife Park in Kingussie. They will breed wildcats for later release once threats have been reduced in the wild.