Tackling environmental waste by engineering microbes to clean up after us

Posted by Natasha Little on November 3, 2015

Nikolaus Muldal, microbiology graduate from the University of Sheffield, sheds light on the exciting field of synthetic biology and how it might help us clean up our environment.

Imagine the scene: 640 Olympic sized swimming pools overflowing with plastic rubbish. One group of researchers found this to be an unfortunate reality with over four million tonnes of plastic waste littered in our Oceans. These plastics not only harm wildlife but are consumed by fish that then enter the human food chain. Toxic chemicals within the original plastics eventually make their way into our diets. To tackle this growing environmental problem, scientists are exploring new avenues and technologies. Dr Louise Horsfall MRSB is one such scientist making use of the expanding field of synthetic biology. 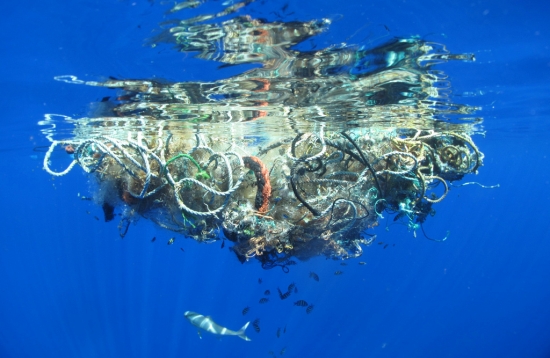 In 2014 researchers estimated that at least 4 million tonnes of plastic waste was in the oceans, enough to overfill 640 Olympic swimming pools. Image: Lindsey Hoshaw

As part of Biology Week 2015, I recently went to the debate ‘Synthetic Life: How far could it go? How far should it go?’ at the Royal Institution. Chaired by geneticist and journalist, Dr Adam Rutherford, a panel of researchers debated with members of the public on a range of topics all linked by synthetic biology. A rapidly advancing field, synthetic biology applies engineering principles to biological systems to create new and useful products.

Dr Horsfall’s expertise is in engineering bacteria to clean up environmental waste. Dr Horsfall talked about how common industrial processes produce waste that could be useful if converted into other forms. The example of whisky distillation piqued audience interest. At the end of the process, dissolved copper is leftover mixed in with dead yeast. Copper is toxic (really really toxic for sheep) so it needs to be removed before the leftover yeast and unfermented sugars can be used as nutritious animal feed (think marmite). Extracting the dissolved copper from the yeast mixture would yield not only environmental benefits, but would also provide additional economic benefits to the distillery. Creating new organisms which might be effective in extracting the copper is exactly where synthetic biology would come into play here.

Addressing the broad issue of recycling in our society, Dr Horsfall spoke about how we currently rely on a linear economic model; we take materials from our planet, make them into something useful and then dispose of them. However, she believes that a day will come when that model will become a circular economy whereby living systems will be recycling much more of what we make. That way we will be reducing the amount defined as ‘waste’ as well as ultimately relying less on extracting Earth’s finite resources.

“Should we release synthetic organisms into oceans to biodegrade plastics?” asked Dr Horsfall of the audience. Of all four questions posed during the debate, this proved the most divisive with half the audience voting for and half against. I felt this was the most interesting result of the evening because it seemed to highlight people’s worries about synthetic creations mixing with ‘naturally’ occurring populations. I am on the fence: the idea of cleaning up our oceans is fantastic; however, can we be certain that releasing synthetic life won’t upset the natural balance of oceanic ecosystems leading to further environmental issues?

Synthetic biology is opening up whole new avenues to solve global problems. The ability to go beyond traditional materials and incorporate ‘biological tools’ into an engineer’s toolkit could lead to a new technological revolution. With this potential shift in the way we create new (and old) products we will need to consider the social and ethical implications of this new way of manufacture. Scientists, engineers, and society will all need to think about what boundaries they are prepared to push. I for one look forward to the next one hundred years of living systems re-created from scratch.

The Biology Week debate was organised in partnership by the Royal Society of Biology and the Biochemical Society. Read more about the debate in the RSB news or in the upcoming issues of The Biologist and The Biochemist. The debate will be available to watch soon on the Royal Institution’s YouTube channel.

Posted under Biology Week,Events,Latest research,Nature and tagged with biodegradable, oceans, recycling, synthetic biology, waste
Comments Off on Tackling environmental waste by engineering microbes to clean up after us