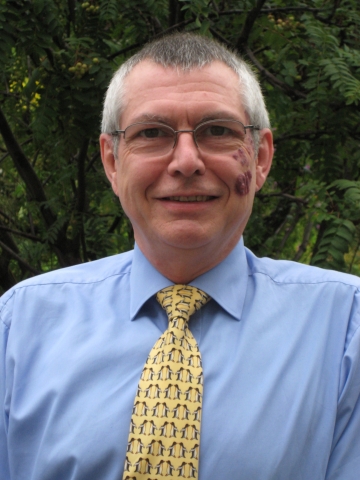 Professor James Prosser OBE FRSB, chair in molecular and cell biology at the University of Aberdeen, discusses the living world of soils.

As you walk around your garden, you may not realise it, but you’re treading on a dense and diverse community of many different life forms. This community creates and sustains the soil and performs the many, varied and essential functions that enable plants, shrubs, trees and, of course, weeds to grow. This blog discusses the concept of soil as a living ‘meta’organism, rather than lifeless dirt, the ways in which soil benefits us and the threats that we pose to its sustainability. It coincides with the International Year of Soils, which also celebrates the importance of soil in the production of food, fuel and fibre and in environmental and human health.

The most obvious signs of life in soil are plant roots and soil animals, such as earthworms and mites. One of their functions is as soil engineers. Earthworms, for example, tunnel through the soil, transporting material in their guts and creating channels that facilitate movement of water and air.

Microscopic organisms, the single-celled bacteria and archaea (0.001 mm in size), filamentous fungi and predatory protozoa, are ‘invisible’ and therefore frequently ignored, but their biomass, diversity and activity are substantial. A single gram of soil, little more than a pinch, can contain many kilometres of branching fungal filaments and several billion bacterial cells (as many cells as there are people on the planet), belonging to 100,000 species. The mass of microbes in an acre of agricultural soil may be equivalent to 10 – 15 sheep.

This microbial community is fed by organic compounds exuding from plant roots, which are consequently surrounded by dense bacterial populations, equivalent to towns. Other areas, where nutrients are scarce, are less populated and equivalent to rural areas or even deserts. Root exudates include signalling compounds that attract beneficial microbes. For example, nitrogen-fixing bacteria trap atmospheric nitrogen and make it available for plant growth, while root colonising ‘mycorrhizal’ fungi supply phosphorus, which plays a role in photosynthesis and respiration. 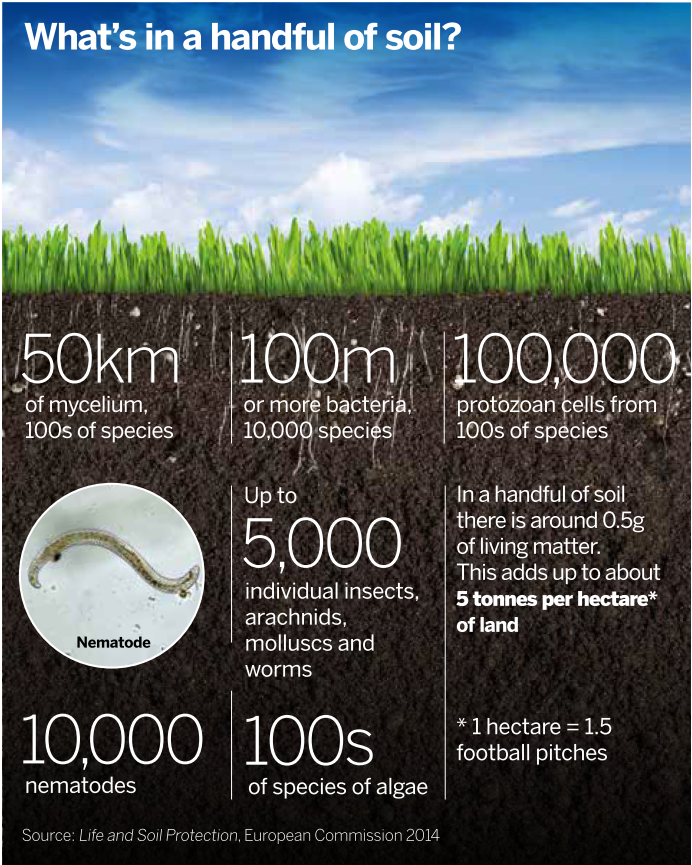 Soil is a reservoir for commercially valuable organisms, notably antibiotic producers, but also, on the negative side, for plant pathogens. Some microbes can be costly: nitrifiers convert fertiliser ammonia to nitrate, which washes out of soil rather than supporting plant growth, leading to annual multimillion pound global losses. Soil microorganisms also produce 60 gigatonnes of carbon dioxide1 and large amounts of other greenhouse gases nitrous oxide and methane, thereby contributing significantly to global warming.

In natural ecosystems, the dynamic biological processes within soil sustain its structure and its ability to support agriculture and forestry, but these processes cannot be taken for granted and our activities can seriously threaten this balance. Intensive agricultural management, to increase food production, can disrupt soil structure, leading to erosion and desertification, and global warming may increase decomposition of the store of soil carbon.

The physical, chemical and biological complexity of the soil environment makes it difficult to understand and predict how activities will influence the many interacting processes required to sustain essential soil processes. This complexity is also a major reason for the diversity of organisms that inhabit it. This makes soil an exciting and challenging ecosystem for biological research that is essential for future prediction and management of soil activities and processes to avoid current threats to soil sustainability and preservation of this invaluable resource.

Find out more about the International Year of Soils 2015 and read more about soil in The Biologist.

Read our other Biology Week blogs and find out about life science activities around the UK and beyond this Biology Week.